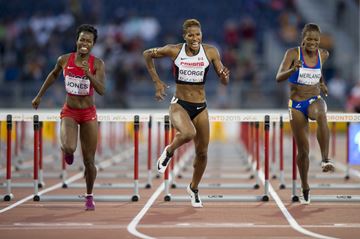 In an event that is over in just a few blinks of an eye, there is little margin for error, nor is there much adjustment time when a sprint starts to slip off the rails.

For Markham’s Phylicia George, that was the case Tuesday night as she settled for fifth place in the Pan Am Games women’s 100-metre hurdles at CIBC Athletics Stadium on the York University campus.

“It was not too bad,” said George, still trying to catch her breath minutes after the event won by American Queen Harrison in a Pan Am record time of 12.52 seconds. “I got out well the way I wanted, but I didn’t finish well.”

George, who was making her Pan Am Games debut, matched her qualifying time of 13 seconds flat that placed her seventh among the field of eight qualifiers less than three hours earlier. A total of 16 women started out in two heats.

“I’ve been dealing with small hiccups in training, so I’m a bit behind,” said George, who finished sixth at the London Olympics in the 100 hurdles in 2012. “I felt decent.”

Fellow Canadian Nikkita Holder of Pickering captured a bronze medal with her season-best time of 12.85 seconds.

George, a former student at Father Michael McGivney Catholic Academy in Markham, has struggled with the effects of a leg injury suffered in 2013 that carried over last year and now into 2015.

“I had a flare-up, so I wasn’t training as much as I wanted. This for me is a stepping stone to worlds.”

The world championships are held Aug. 22 to 30 in Beijing.

Prior to the competition, George spoke of the excitement involved with competing in front of a hometown crowd on the stage provided by the Pan Am Games.

“This was amazingly good,” she said. “Everyone was so supportive. The crowd was great.”